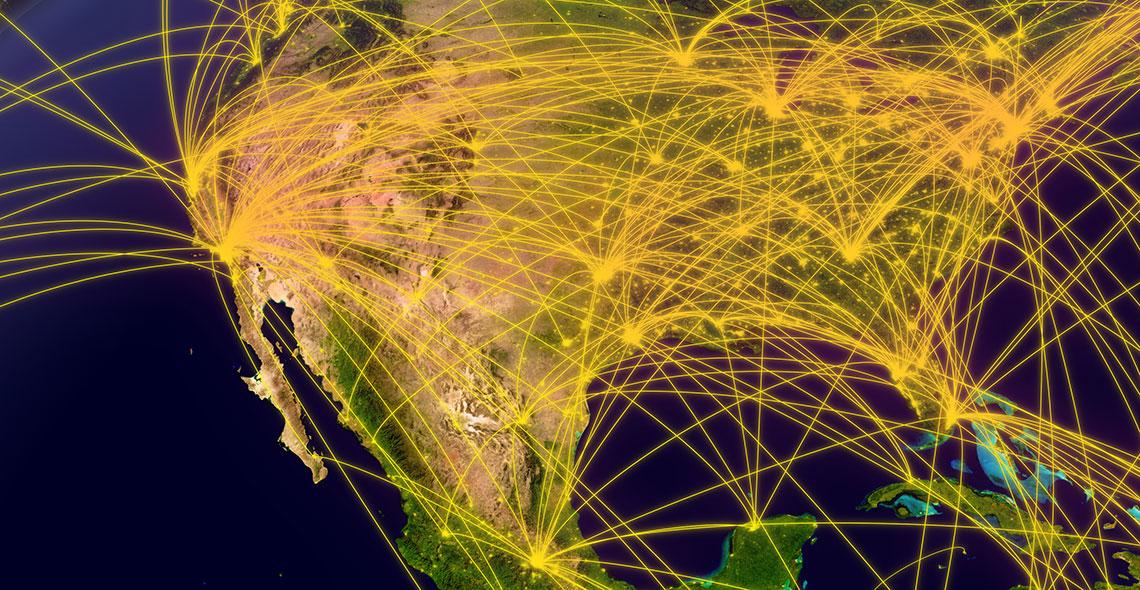 July 1, 2020 - In a just released report, Arizona’s Trade and Competitiveness in the U.S.-Mexico Region: Annual Report 2020, the Economic and Business Research Center (EBRC) examines in detail impacts of the coronavirus pandemic on trade during the first four months of 2020. The report presents these impacts in the context of the last decade of trade and Arizona’s competitive position by the end of 2019.

Arizona’s trade with the world almost doubled during the decade 2009 through 2019, increasing 94.7% growing from $31.3 to $51.2 billion. Trade with Mexico and China were the major contributors, gaining 90.7% and 90.1%, respectively. Trade with Canada slowed in the middle of the decade, but picked up in 2019 as trade with China began to falter and finished the decade with an 85.2% gain. In fact, during the second half of the 2009-2019 period, Arizona’s world trade grew at a pace significantly faster than the nation as a whole. While Arizona’s trade reached an all-time high in 2019, U.S. world trade experienced a noticeable dip in 2019.

By 2019, uncertainties were being felt in the foreign trade arena. First, the ratification of the revamped NAFTA moved very slowly, although it was anticipated that all three countries would eventually sign the trade agreement, now under a new name - actually three new names - USMCA in the United States, T-MEC in Mexico, and CUSMA in Canada. Second, current U.S. policies regarding border wall construction, detentions, deportations and handling of asylum issues has impacted border ports of entry and relations with Mexico. Third, U.S. trade relations with China became highly contentious and soon were labeled “trade wars.” There were also signs that the global economy was slowing down. By the end of calendar year 2019, the voices from China, at first subtle, but soon rising, started bringing attention to the emergence of COVID-19. Despite these challenges, Arizona’s trade with its major trading partners – Mexico, Canada, and China - finished 2019 on the upswing with robust growth.

Clearly, Arizona’s economy has become increasing integrated into international markets particularly the North American production sharing system. This is increasing integration is also reflected in the rise of China to compete with Canada as a trading partner and the increasing volume of trade especially in manufacturing products with Mexico and Canada. Arizona was in a strong position in terms of trade when the data for 2019 were in with robust growth in exports and imports. Arizona was also keeping up with its neighbors in the border region with an increasing share of So. border states’ total trade. However, this increasing integration and growing export share of GDP, as we have seen with the coronavirus pandemic, carries risk.

By the time all the data were in for 2019, Arizona’s merchandise exports to the world hit $24.7 billion roughly 6.7% of Arizona’s GDP. Mexico was the state's largest export destination last year, with $8.2 billion, accounting for roughly one-third of the total. Canada was our second largest destination at $2.1 billion, followed by China at $1.1 billion. China was hit first by the spread of COVID-19 and its industrial activity has been significantly curtailed and travel to/from China remains restricted. Mexico is currently experiencing significant spread as is Canada. As we write this report, Arizona is COVID-19 hot spot. We currently have hard data through April 2020. Pandemic effects begin to show up in January through March, but the major declines are evidenced in the April data bringing trade levels essentially back to the bottom of the Great Recession, Figure 1.

Arizona’s total exports to Mexico dropped $213.7 million or 32.1% in April alone. The April number, $452.5 million, was 34.9% below its value a year ago. Similarly, Arizona’s manufacturing products exports dropped 41.5% in April, a decline of 44.9% from its value a year ago. Arizona’s imports from Mexico were hit even harder than exports in April. In April, Arizona's total imports dropped 33.8% when compared to April 2019, and manufacturing imports fell 43.3% in over the year comparison.

Find detailed analysis and data for import/export, commodity flows, and border crossings, and many other regional and international trade indicators at azmex.eller.arizona.edu and read the entire report.