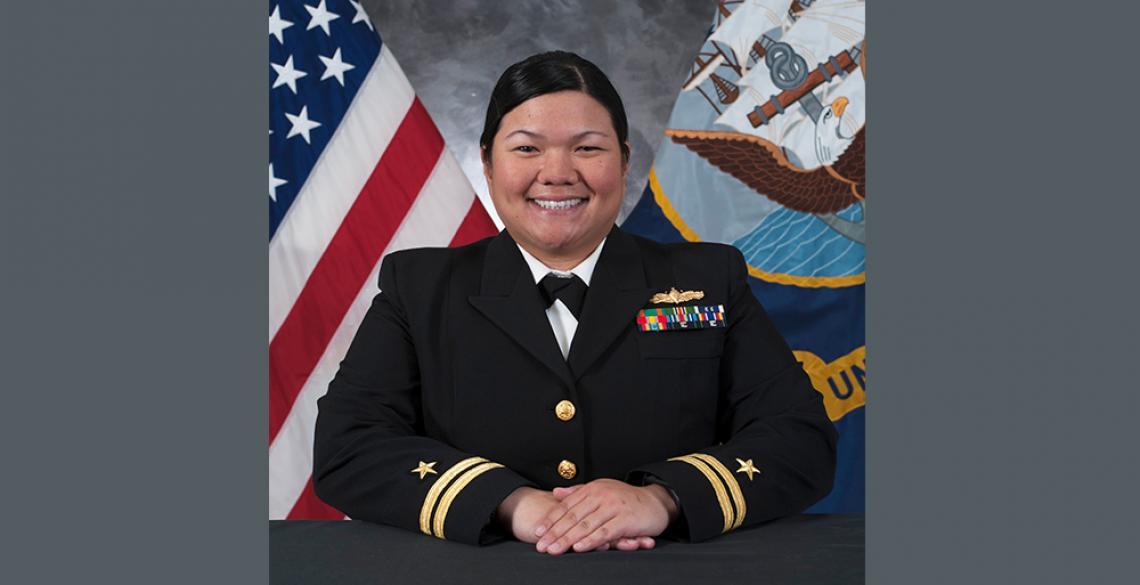 Growing up in a military family, Jade West ’19 MBA knew early on that she wanted to pursue a career serving her country. What she didn’t know was just how far that dream would take her—or how much higher education would buoy her success.“I come from a Navy family, so it was easy for me—I knew I wanted to serve,” says West, whose dad, a retired veteran, enlisted from the Philippines. “My dad only had a high school education and didn’t speak English, but he rose up through the ranks and retired after 23 years.” With her father’s dedication and perseverance as her example, West attended the United States Naval Academy, becoming the first in her family to attain a college degree, and rose to officer status in the U.S. Navy. Her father was her first salute. “He was extremely proud,” says West, whose official title is lieutenant and surface warfare officer—a position that puts her in charge of operations on board her ship.

Though she was on shore duty, West was navigating new waters—and enhancing her leadership skills—as a student in the Eller College of Management’s Online MBA program. “Eller’s Online MBA is expanding my view of the world,” she said. “It’s been extremely positive and challenging, and it’s helping me to learn how I can be a better leader and person.”

Stationed in Hawaii, West began the University of Arizona program in January 2018. A large draw for her was the flexibility of taking online courses—not only because she lived on Oahu, but also because she was adding to an already full plate. The full-time naval officer is also a new mother. “I’m not on a set schedule—I can work around my career and my family, and that’s huge for me,” says West, who graduated in December 2019 with dual concentrations in finance and management information services/privacy and security. “And the curriculum really appealed to me—I can directly apply it to my job.”

She says the program’s focus on leadership and ethics has been particularly valuable for her military career. “I lead sailors, that’s what I do every day,” West says. “I’ve learned to appreciate the importance of building relationships and being able to inspire people to do their jobs. So to learn about different leadership styles and observe my own style has been huge.” West adds that by investing in herself through education, she hopes to set an example for her daughter and the sailors she leads to do the same. “I want them to believe in themselves because that’s what I’ve learned,” she says. “Education is key.” For West, that means getting her MBA is just one more stop—but certainly not the last—on her educational journey. Following graduation, she will head to Newport, Rhode Island for additional Navy training. “I’ll be there for six to eight months for department head school to learn the tactical side of being a war fighter,” she explains, adding she expects to deploy at some point in 2020. “I’m excited to go back to the fleet to lead sailors and serve my country.”

West is also happy that she’ll be heading out to sea without any lingering educational debt. She was able to cover both her undergraduate and graduate schooling through scholarships and grants. “Everyone has challenges and hardships,” she says, “but what I tell myself and my sailors is: ‘The only person stopping you is you.’ If you really want something, you’ll find a way.”

7 Ways To Harness The Power of Diversity